DU Colleges Ranking 2020 – The Ministry of Human Resource Development (MHRD) releases the rankings for all the top educational institutions in India through the help of a methodology, known as National Institutional Ranking Framework (NIRF). The NIRF college rankings consists of best colleges in the country based on parameters such as Teaching, Learning, and Resources, Research and Professional Practice, Graduation Outcomes, Outreach and Inclusivity and Perception. MHRD announces DU colleges ranking annually in the month of April. In the view of Covid 19 situation, the MHRD has delayed the rankings and announced NIRF ranking 2020 for DU colleges on June 11. Miranda House, Delhi University College bagged the first position followed by Lady Shri Ram College and Hindu College who got the second and third rank, respectively. Five DU colleges managed to mark their place on the top 10 colleges of NIRF ranking 2020. Along with DU colleges 2020 ranking, MHRD has also announced the list of top universities and top colleges in India. The institution aims at enlisting the top colleges and universities in India as per their scores calculated. The DU colleges ranking scores 2020 will be calculated by the methodology adopted by NIRF.
LATEST: DU Seventh cut off 2020 to be released on December 5.
DU Sixth cut off 2020 has been released on November 28.
DU cut off 2020 released for first six rounds
DU 5th cut off to be released on November 7
NIRF Ranking 2020 for Top Colleges in India released by MHRD
NIRF Ranking 2020 for Top Universities in India released by MHRD
Careers360 presents DU colleges ranking to aspirants like you who wish to seek which college is excellent and the top-most chosen by MHRD for admission. Going through the list of DU college ranking aids you to choose your college while you are getting ready for DU admission 2020. 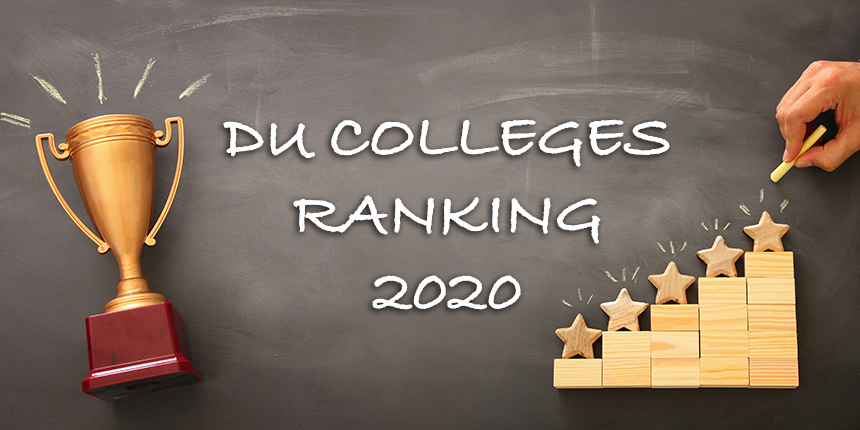 The NIRF rankings 2020 DU Colleges will be carried out considering the following elements under every parameter.

Last year, the MHRD NIRF body had ranked as many as 11 DU Colleges in its list among other colleges in India.

While Miranda House had bagged AIR 1 as per the NIRF Rankings with a score of 73.72, Hindu College had grabbed the second position with a NIRF Score of 70.57. The fourth position was bagged by St. Stephen's College with a score of 67.55.

Lady Sriram College for Women was in fifth place with a NIRF score of 66.71 and Shri Ram College of Commerce had secured the seventh position across Indian top colleges securing 64.94.

Question: Who is responsible for releasing the colleges’ ranking for 2020?

Question: How are the DU colleges ranking prepared?

The NIRF Ranking of DU Colleges enlists the affiliated colleges of the University of Delhi as per their scores calculated by the methodology adopted by NIRF.

Question: What points does the ‘Research and Professional Practice include?

It includes the following points-

Question: Are the rankings consistent throughout the coming years?

Question: What is the Hindu College DU ranking according to NIRF 2020?

As per NIRF ranking, Hindu College bags the third position with a score of 69.67.