When students choose a science stream for Class 12, most of them study either PCB or PCM. The moment the choice is made, they are under tremendous pressure to either become an engineer or an allopathic doctor. However, all of them cannot become doctors because the number of MBBS seats are limited compared to the number of aspirants. The situation is not that bad in engineering with a large number of seats. However, the catch is that if you want to study in top institutions like the IITs, NITs or in a BITS Pilani, the competition is equally tough. What most of these science students don’t realise is that the field of science opens up career paths that are equally or more attractive than that of a doctor or an engineer. 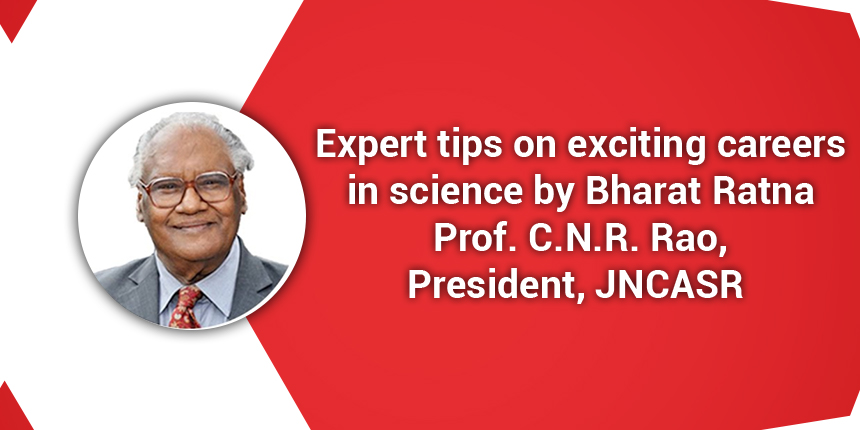 The father of Indian Science in modern times, who is a recipient of Bharat Ratna, the country’s highest civilian honour, Prof. C.N.R. Rao, President of Jawaharlal Nehru Centre For Advanced Scientific Research Nehru Centre For Advanced Scientific Research (JNCASR) now gives you tips and important insights on “Careers in Sciences”.

Dr Rao says opportunities in various branches of sciences are immense. But the fact is that most of the students nowadays are not aware of these vast opportunities. The eminent scientist also says that science has become so cross-disciplinary that a student pursuing one branch will have opportunities in other branches as well.

My name is Karunesh. I want to do science but my parents want me to do engineering and get a job first. What should I do?

This is a common problem. That is why around 7000 engineers are jobless, just in Bangalore. Every father and mother guide their child to make money as early as possible and so on. Parents are the worst advisors. In my case I had wonderful parents. When I said I wanted to do this my father and mother said okay. I think that is how parents should be. Let the child do what he likes the most.

Is science an exciting stream to pursue?

Well, science has changed. It is not what it was some years ago when I was a young man. For example, look at biology. Every day there are new discoveries. Right now, this COVID-19 situation requires a new vaccine. You need good biologists for that. I want you to know that opportunities are also changing. Science is now highly cross-disciplinary. For example, though I am a chemist I have published papers in material science and physics. Now, science is no longer a single area to work on like the olden days.

Students feel that science is not part of our life. How do you look at this?

Science has now become part of our life. The other day I was amazed by our cook who came across a pen drive and gave it to my wife saying, “Madam this is your pen drive.” I don't know where she got to know what a pen drive means. But the use of scientific terms has become so common that everyone uses them even without knowing about it. Science is required today in many professions in many areas. Even if you are an engineer, if you want to be an outstanding engineer you have to know a lot of science to back you up. In fact, opportunities are increasing but unfortunately what is happening is that our science teaching is still so boring. In fact, the chemistry they teach in schools has not changed in the last 50 years.

So, you mean to say children are not taking to science because of deficiencies in teaching?

There are 60 million children in villages. Where are the teachers to teach them science? We have to improve teaching science at school level to excite the imagination of children. Let me tell you my own case. When I was an 11-year-old, Sir C.V. Raman came to our school and gave a lecture. I thought, “My God I want to be like that man.” He was quite exciting. So, we have to directly contact young people. Of course, we need to have online meetings. But seeing great scientists and scientists talking to you about science is very important. That is why I go all over India giving lectures to young children. Everywhere I go I see bright young children who need help and direction. They are all interested in science. A new India is emerging where the young children are all interested in science.

When should students decide that they will choose a career in science?

The excitement in children about science starts at school level. When you are about 14 -15 make up your mind about what you want to be. Do you want to become a philosopher, economist, musician or a scientist? If you want to get into any of these careers, make up your mind and never give up. Anyone who makes up his mind and goes about it in a determined manner will never fail. Doggedness is the most important quality in science. Gandhiji succeeded in getting freedom for us not because he was a very brilliant man but because he did not give up his doggedness for freedom. India wants world leaders in science. The only way that can happen is if the younger generation takes up science and some of them become really outstanding and famous everywhere. If you want to be on top of the world you have to invest more in science. What we do not realize is that if you look at the number of scientists in the world, the number of scientists in our country is very small. The ratio of the number of scientists to the population is very small compared to China, Korea, Japan and, of course, the United States or Europe.

Are there good institutions to study science subjects in the country?

Today there are plenty of good institutions like IISERs and IISc. There are also a lot of opportunities in science in India. New technologies are coming up, new discoveries are being made and now the start-up companies are coming up in a big way. At JNCASR many young scientists are coming up with start-up companies and new ideas. For example, one of them is trying to find a cure for Alzheimer disease. Another scientist has created a computer program which is so powerful that our army, the TATAS and the Ambanis are interested in it.

I was giving a lecture in the Massachusetts Institute of Technology (MIT) in America. Why is MIT such a great institution? A professor there publishes a lot of papers; works with students at the same time creating ideas, innovations and helping start-ups.

I have just completed 70 years in scientific research… I hope many of you will get excited about doing science and put up your mind to explore, to create and so on. The only quality required for that is doggedness and dedication

The advice on choosing a career path in science was given by Bharat Ratna Prof. C.N.R. Rao, President, JNCASR in a webinar hosted by Careers360 recently.

If you have any doubt regarding any course or career, write to us at: ask@careers360.com