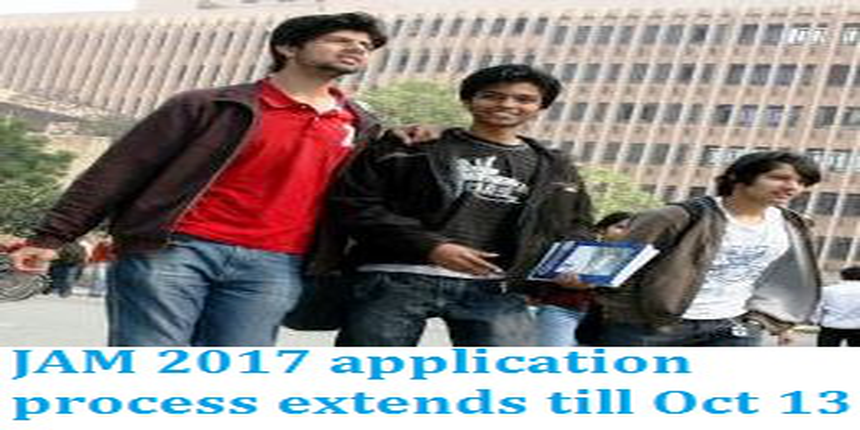 JAM 2017 application form can now be filled till October 13, 2016, as IIT Delhi, the JAM organising institute for this year has extended the last date for submitting application forms of JAM by as many as seven days. As per the official notification, applicants can now submit the JAM application form 2017 by 5:00 pm after paying the fees.

“Candidates can submit the online application forms after paying the requisite amount of fees for same and also upload the documents at the official website till 5:00 pm of October 13, 2016,” said the IIT Delhi notification on JAM 2017 application extension.

Earlier, the applications for JAM 2017 were to be submitted till October 6, 2016, which however, has now been extended for a week.

The other dates for JAM 2017 exam events have remain unchanged as the admit card for IIT-JAM can be downloaded from January 10, 2017 and the IIT Delhi regulated Joint admission test for M.Sc programmes is scheduled to be held on February 12, 2017.

In addition to the above information, IIT Delhi has also informed that candidates who have paid the application fee for JAM 2017 more than once, the extra payment if received by the organising institute would be refunded after the last date of applications, i.e., October 13, 2016.

Stay tuned to university.careers360.com for more news and updates on JAM

I am bca student can with 3 sem maths can i write iit jam ms statastics am i eligible to join or write?

How many students appeare in iit jam Ms 2020

What is the cutoff score of Jam physics

The qualifying mark of IIT JAM Physics according to previous years analysis is 15.

Hope this information helps you.

IITJAM Chemistry paper consists question from three basic sections of chemistry that is, Physical Chemistry, Organic Chemistry and Inorganic Chemistry. Although few other subjects like analytical chemistry also contain some weightage but it can be grouped into the above three subjects also. Now, the books for IITJAM Chemistry which you should refer are given below although I would advise to study some of them only if you have your basics clear as they are quite descriptive and you have to be clever enough to understand the important topics and the not-so important ones. The books which you should refer are:-

• Inorganic Chemistry:- JD Lee, Meissler-Tarr, James E.Huheey. These are the authors of the books and the names of the books are different but are commonly known by these names only. Also you must refer to Vogel's Qualitative Inorganic Analysis book as in my opinion it is the best for inorganic analysis.

• Organic Chemistry:- You can refer the books by these authors IL Finar , PS Kalsi and also Mehta and Mehta is good in clearing the basics and reaction mechanisms.

• Physical Chemistry:- You can refer these books (these are the commonly known authors of the books) Peter Atkins, Samuel Glasstone, Thomas Engel-Phillip Reid, Keith Laidler etc. These are the books for different topics such as Chemical Thermodynamics, Chemical Kinetics etc.

These were some of the books which you can refer to but these are not necessary as you can have your own reference books based on difficulty level of some of these books.