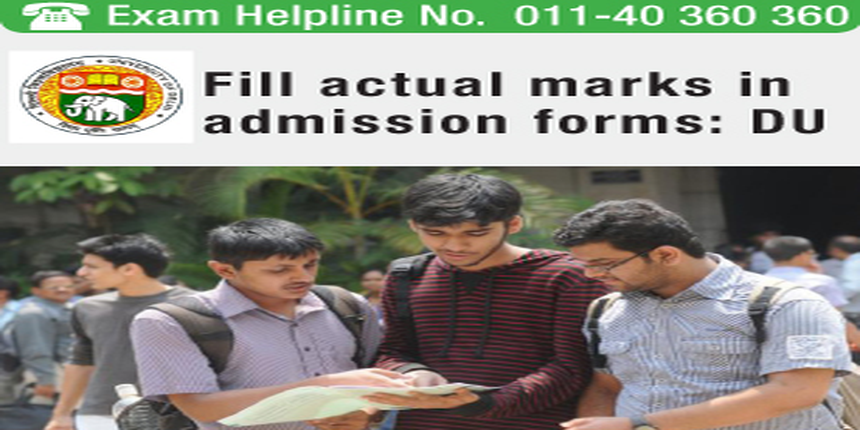 Delhi University has asked applicants to fill their actual marks as obtained in the board exams, in the undergraduate admission forms and avoid entering marks basis their own calculation of different weightage that they might be eligible for.

The DU officials said the actual marks entered by the applicants will help them calculate any weightage for different applicants.

Malay Neerav, DU joint dean, students’ welfare and media co-ordinator said, "We strictly want to inform the students to fill in the actual marks obtained and leave it to colleges to deduct or add marks as per the regulations of DU admission process."

“Everything you wanted to know about DU admissions is here. Predict your college, get latest updates, trends and insights on DU admissions. Click Here “

As announced earlier, the admission process of 2014-15 will start on June 2 for about 54,000 undergraduate seats available in different courses in 65 colleges of Delhi University.

The University officials expect over 3,00,000 applications for its undergraduate seats this year. Last year, 2,56,024 candidates applied for different undergraduate programmes in the University. The new user-friendly app is supposed to help a large number of students in admission process.

Meanwhile, DU is also conducting open day sessions to address queries of the prospective students and their parents regarding undergraduate admissions since May 21. The Open Days will continue till May 30.

Delhi University is likely to continue with 10 or more cut off lists under its 2014 undergraduate admission process which is scheduled to begin from June 2.

Stay tuned to university.careers360.com for more news and updates on DU Admissions.

studying in class 12th commerce with maths. I want to pursue CA and b.com side by side. After boards, should I first wait for the board results and du cut off or should I get myself registered for CA foundation? since as per the icai norms, a UG degree student is exempted from giving CA foundation.

I would suggest you to go directly for CA rather than waiting for your result and then do 3 years bachelor's degree.Because if you do CA with side B.com (https://b.com/) ,you can complete it within 5 years but if you do graduation from Delhi University you have to do 3 years graduation and then 3 years for article ship and then 2 stages more.So it will cost you almost 6-7 years.

I Hope This Helps

Can I get admission in any college of Delhi offering bsc in biotechnology by filling a single DU entrance form? Or do I have to fill different forms for every college?

Yes you can get admission for BSC biotechnology many colleges under Delhi University by fillng a single form in the common DU portal. But in order to get admitted in some colleges like St. Stephen's you have to fill separate forms in their respective portals.

in which date start admission to Delhi University and Hyderabad university

Hello Mohammad,
Hope you are doing well.
The University of Delhi will begin the DU 2020 admission process from the first week of April with the release of application form at UG admission
For more information:

Hyderabad University Admission2020-21 registrationwill bestarted from the 1st week of April 2020. Last date for submitting the Online Application formisthe 1st week of May 2020.

I m a science student I want to take up psychology after 12th how much cut off is required to get into DU?

Yes you can take psychology after 12th with science.And cut off  totally depends on from  which category belongs as if you belogs from general 97%+ is required for top colleges in DU.

Hope this will help,Please feel free to ask if you have any other queries.

Im in bsc final year and I pursuing bsc from ignou. So my result will be declare August month. If i submit my degree after counselling it will be possible or not. I want get admission in delhi university for LLB

You can't appear in counseling without mark sheets of the degree exams and Degree certificates.You will have to carry your result in the counselling.
Without those documents you cant participate in counseling process.


I hope this helps.