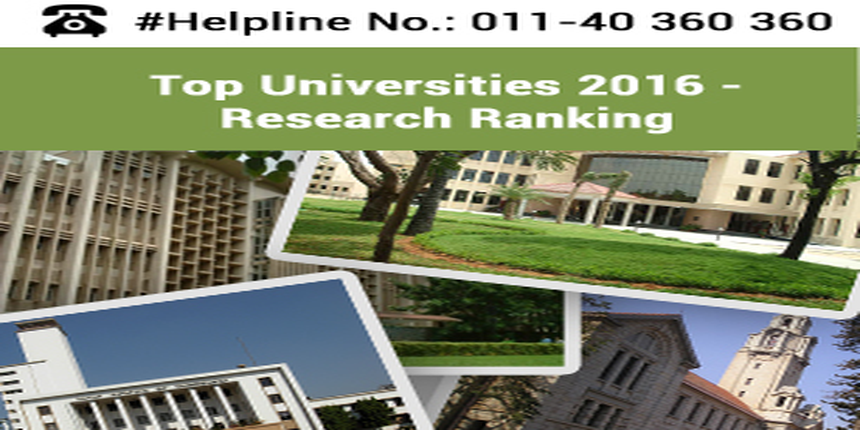 Careers360 brings you Top Research Universities in India 2016 based on annual ranking and rating exercise of universities. The University Ranking 2016 brings you a list of Top Universities by their Research Output in different areas – Publication Count, Productivity Score, Citation Impact and H-index Score.

The list of Top Universities by their Research output is based on Research Rank Methodology as detailed below in this page.

We present here the best 75 Universities in India – Research Ranking.

ScopusÂ® database of Elsevier BV, the largest indexing and abstracting database of peer-reviewed scholarly literature with about 20,500 titles from more than 5,000 international publishers in science, arts & humanities and social sciences was used for searching the publication records, citation impact and h-index. At present, there are 468 scholarly journals indexed from India.

The in-built ‘Affiliation search’ box helped to find a specific institute even if the affiliation was mentioned with a different, yet related name in the published literature. The results were grouped in case there were name variants or the same institute had different departments with records indexed separately. For example IISc Molecular Biophysics Unit and Materials Research Centre of IISc have 3 different names; hence the 3 affiliation variants are grouped into one. For many institutions that had limited publications, records were searched from the main search box using affiliation address.

All retrieved records of an institute were filtered for three years (2012-2014) and selected for further analysis. The citation analysis window gave two key indicators: firstly, the numbers of the articles that cited the records and ‘h-index’. The h-index is one of the most globally popular measures of a scholar’s productivity based on his/her most cited papers. By definition, “A scientist has index h if h of his/her Np papers have at least h citations each, and the other (Np â h) papers have no more than h citations each.”

We also debated extensively on the relevance and need for expanding our database beyond SCOPUS. A preliminary review of Web of Science’s Science Citation Index Expanded and PUBMET were performed for this edition. We discovered that for about 65% of the schools, there are substantial overlaps between these two databases. A few like the University of Delhi, JNCASR have more propensities to publish in journals indexed by SCI than Scopus. PubMed has been a new domain for us. We are also looking at indexing systems for pharmacy and law. But until the data so gathered becomes comparable on a common metric, our focus would continue to be on SCOPUS alone for the purposes of this ranking exercise.