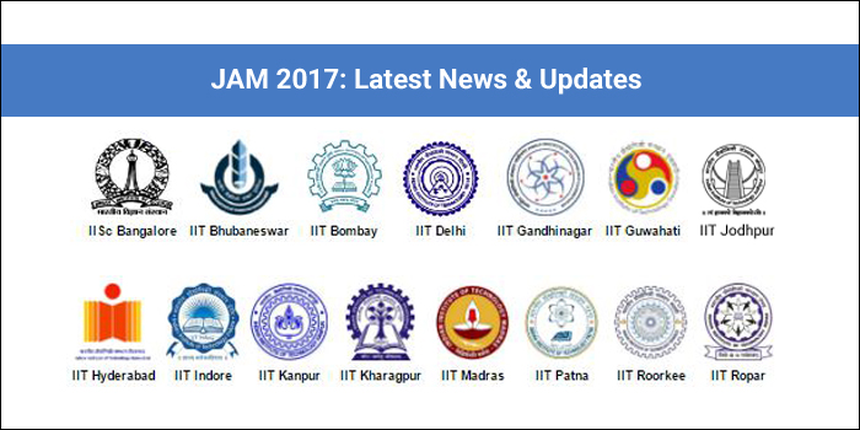 Candidates, through this page will be updated with the official announcements and activities taking place for IIT JAM 2017 admissions.

Latest News and Updates of IIT-JAM 2017

Indian Institute of Technology Delhi has conducted JAM 2017 on February 12 in as many as 63 cities of India.

Indian Institute of Technology (IIT) Delhi has extended last date for submission of Joint Admission Test for M.Sc. 2017 till October 13, which earlier, was till October 6, 2016.

Indian Institute of Technology (IIT) Delhi has begun the online registration (application) window of Joint Admission Test for M.Sc. 2017 from September 2, as many as three days prior to official schedule as it was to begin from September 5, 2016. The online applications of JAM 2017 can be filled and submitted till October 6, 2016.

JAM admission committee, this year, headed by IIT Delhi had announced IIT-Joint admission test (JAM) 2017, an entrance test for admissions to M.Sc programmes across various institutes including Indian Institute of Science (IISc) Bangalore and IITs. IIT JAM 2017 was conducted on February 12, 2017, for which applications had begun from September 1, 2016.

The courses offered in biomedical sciences are-

All these courses are Joint M.Sc.-Ph.D.

For the year 2020 following courses are available in iit jam to do msc.

The eligibility of mathematics at class 10+2 level depend on course in which you want to take admission. For example if you want to take admission to Joint M.Sc.- Ph.D. in Molecular Medical Microbiology for this courses it is not necessary that  you have math at 10+2 level. However for the course  M.Sc.- Ph.D. Dual Degree in Environmental Science and Engineering it is compulsory to have mathematics at 10+2 level.

IIT-JAM is an entrance exam conducted by different IITs every year for admission of students in the M.Sc. program in any of the discipline in which you have pursued Bachelor's of Science.

For a GEN/OBC student 55%, or 5.55 out of 10 aggregate marks in their qualifying degree are required to attempt IIT JAM.

For a SC/ST/PWD student 50%, or 5.0 out of 10 aggregate marks in their qualifying degree  are required to attempt IIT JAM.

As mentioned above, if you have done your B.Sc through Biology subjects than also you can attempt IIT JAM and take admission for M.Sc. Biotechnology and Joint M.Sc.- Ph.D. in Atmosphere and Ocean Sciences and many more.

Moreover, the more M.Sc. courses are available for a Mathematics student.

You may refer to this article for more information about IIT JAM Eligibility Criteria 2020.

If you require to know colleges for which you are eligible then you should go to the link mentioned below.

how to prepare for iit jam for msc in iit?

To prepare for IIT jam, you should be well aware of exam pattern and syllabus.

IIT JAM entrance exam is held in computer-based mode, in two sessions - Session 1 and Session 2. The JAM exam 2020 includes three sections - Section A, Section B, Section C. Total questions that will be asked are 60 for a total of 100 marks. Candidates may note that questions will be of multiple-choice and numerical answer type questions.

Since there are many topics, the candidates will be needed to make a table dividing the topics and subjects and allowing them a specific amount of time to go through.

Prepare notes - Preparing notes, both short and long, will help a lot in revising the topics at the end or whenever it is needed.

Keep exam pattern in mind - The candidates must learn in a smart way by dedicating most of their to the topics which carry more marks. The candidates are suggested to make a priority list, giving those topics the utmost priority which carries more marks than others.

Practicemakes a candidate perfect - Since practising is the most important preparation one can do for their JAM paper, the candidates must focus on practice each and every question available. The sample papers of JAM are available on the website which will help make the candidates acquainted with the actual exam paper and understand the JAM exam 2020 pattern as well.

for more information, you can refer to the link given below-