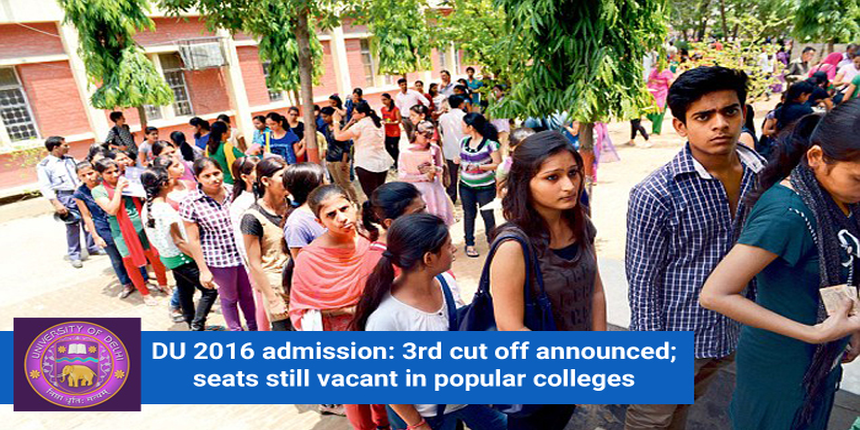 DU 3rd cut off for the admission year 2016 has been announced on July 10 with most sought after programmes’ seats still vacant in popular colleges. The third cut-off of DU 2016, however, has witnessed closing of admission process in a number of colleges for various undergraduate programmes. While a B.Com (H) seat in Shri Ram College of Commerce (SRCC) is available at 97.25 per cent and at 96.50 per cent in Ramjas College, there are no seats available for the UG programme in as many as 19 colleges including Acharya Narendra Dev College (ANDC), Aditi Mahavidyalaya, Aryabhatta, Ramanujan, Shyama Prasad Mukherjee, Shri Guru Nanak Dev (SGND) Khalsa and Zakir Hussain College.

Careers360 brings you insights on DU 3rd cut off 2016 as despite vacant seats in the popular programmes like B.Com (H), BA (H) Economics and B.Sc (H) Mathematics, there is a slight fall in the cut-off percentages with respect to the previous one announced on July 4.

Admissions available for popular programmes in sought after colleges

Hindu College, too, had to announce the third cut off for filling vacant seats in as many as 17 programmes including BA (H) Economics, BA (H) English, B.Com (H), B.Sc (H) Chemistry and B.Sc (H) Mathematics, where admissions in the programmes are available with minimum cut-off percentages of 97, 96.50, 96.75, 96 and 96.75, respectively. Interestingly, admissions at the college for popular programmes like BA (H) Philosophy, BA (H) Political Science, BA (H) Sanskrit, BA (H) Sociology, BA programme and B.Sc (H) Zoology are available at just ‘passing marks’ in Best of Four subjects’ aggregate.

Notwithstanding to this trend, cut-off percentages of a few programmes have shown a significant fall from that of the second list. The third cut-off list for B.Com programme offered in Ramjas College has climbed down to as much as 3.75 points from last cut-off of 97.25 per cent. Dyal Singh College has dropped its BA (H) English cut off by 3 points in the 3rd list with admissions offered at 90 per cent, whereas DU 3rd cut-off list for B.Sc. (H) Maths programme in Shahid Rajguru College of Applied Sciences for Women has seen a steep fall of 4 points from 93 per cent as announced in the 2nd list.

Surprisingly, admission to B.Com programme in Shyama Prasad Mukherjee (SPM) College is now available at 91 per cent, which however, had shown ‘admission full’ in the second list.

Based on the third cut-off, aspirants can get their documents verified and receive the admission approval by the respective colleges between July 11 and July 13, 2016, after which the central university will be declaring its 4th cut-off on July 15, 2016.

University of Delhi offers admissions to around 54000 seats offered at as many as 77 colleges for a total of 65 programmes through merit.

Stay tuned to university.careers360.com for more news and updates on Delhi University admissions