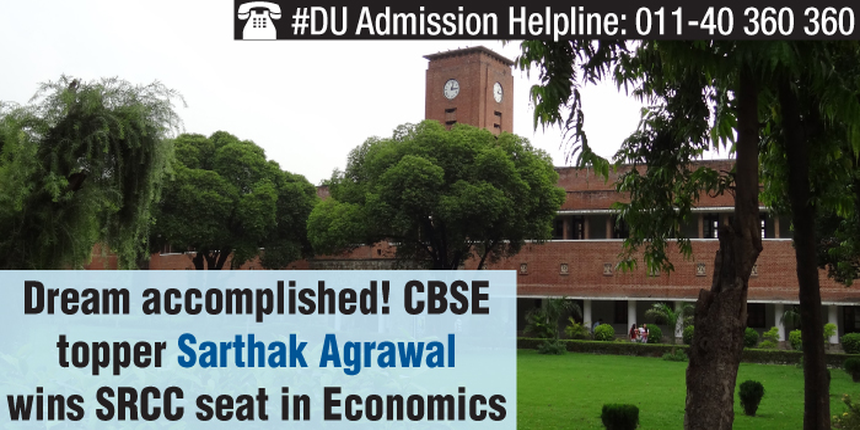 It was a dream accomplished for CBSE topper Sarthak Agarwal as he won a seat at prestigious Sri Ram College of Commerce (SRCC).

“Sarthak Agrawal has taken admission to our college,” confirmed an official from SRCC. Sarthak took admission in BA Economics (Hon) as he was eligible for the same on the basis of our first cutoff, the official added.

The Delhi boy, who scored a whopping 99.6 per cent in his class XII board under CBSE, had applied for admissions in different DU colleges for BA Economics (Hon). Though he had secured admission in different colleges based on his high score in the first list itself, the high cutoff of St. Stephen’s College, interestingly, could not accommodate him in the first admission list as his name stood at 4th position in the waitlist.

The DPS student who immediately became a role model for lakhs of school students and an instant hit among the social media enthusiasts across different age categories, now aims to enter Civil Services after his graduation at Sri Ram College of Commerce (SRCC).

With Delhi University releasing its first cut off list for admissions on June 30, 2014, the high cut off for many courses in top colleges came as a shock for aspirants seeking admissions to the recently revised UG programmes.

The first cutoff list of Delhi University was released on June 30, 2014 with as many as three colleges declaring 100% as cut off for some top courses. Colleges like Atma Ram Sanatan Dharam College, Acharya Narendra Dev College and Shyama Prasad Mukherjee College, have set new benchmarks by declaring 100% cutoff for the first time in general category. Sri Ram College of Commerce and St. Stephen’s have declared 99% and 98% in Commerce respectively.

The first round of admission process which started on July 1, 2014 ended on July 3 and the second cutoff list were released on July 3 late night by different DU colleges.

DU Third Cut Off 2020 - The affiliated colleges of Delhi University will release the DU 2020 thir...

i am donig b.com not hons. from hnbgu.so i want to know that am i capable of doing m.com economics from delhi university? please suggest your views

Hi dear,
Yes definitely you can pursue M.Com in economics.
As per the eligibility criteria you must have secured at least 60% marks in any undergraduate degree in any subject.Hons degree is not mandatory.

Can i get admission in best college of du for bsc radiology with 82.4% in intermediate

see cutoff score changes year to year and it depends on lots of factors like number of participants, students category, seat matrix etc, however as per your score you have decent chances in tier 1 colleges.

all the best for your future endeavor.

Delhi University admission will begin the month of April 2020.

Some of the colleges you can get admitted are

Cut off can vary from year to year for the collegws.

Hope this will help you.

Is delhi university provide BA course for political science ? is a there any entrance exam for that ?? If there... Can you list the date of application and entrance exam syllabus?

There's no entrance exam for admission in BA political science in Delhi University.

The admission is conducted on the basis of the merit of class 12th and the cut offs.

The university releases its online application form in the month of April.

For further information, you can refer to the link given below -

what is the cut off for delhi university?

The colleges release its own cut off marks.

The cut off marks depends upon the courses and categories. It varies from one college to another.

You can check the cut off of the colleges at the official site of the Delhi University.