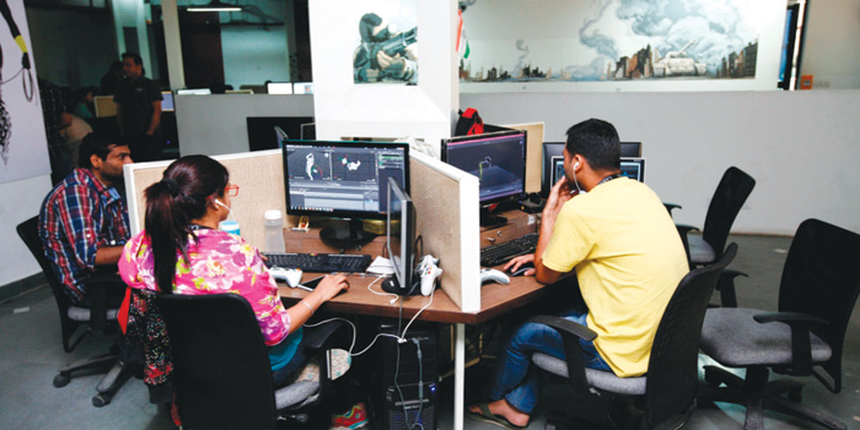 Career in Professional Courses: Gaming - We bring you expert insights on Career in Gaming industry which has now emerged as serious profession and not mere a past-time. Read here to know the courses offered and career prospects in Gaming.

A career in gaming industry, earlier seen as a pastime has turned into a serious profession thanks to the exponential growth of India’s video gaming industry. As per NASSCOM, the Indian industry is estimated to be worth around $ 890 million and is expected to see rapid growth in the coming years.

Gaming is a highly competitive sector where a professional needs to have a fine balance of fun, creativity and technology. Gaming industry requires people from different segments but the most important aspect is passion and creativity. Designing, which is a key aspect of gaming demands qualified and artistic game designers, engineers, programmers, artists, writers, producers and other skilled staffs.

The gaming industry creates different types of games for different platforms like video games that utilize dedicated consoles to run the game. It is about computerized and electronic games played on TV and other display devices. Console games are those that are played on consoles like play station. Computer games are delivered on disks and played on PC and stored on DVDs or CDs. Multiplayer games are played with co-gamers logged on to the game and wireless games are primarily dominated by games played on mobile phones.

Evolution of gaming in India

Career opportunities abound in the domestic market, due to a large pool of English-speaking population and availability of skilled manpower and that too at an affordable salary structure. This is turning India into a prominent outsource destination for gaming development, and a large number of gaming studios have set up studios in India.

Ninad Karpe, Managing Director & CEO of Aptech Ltd. says, “What once was considered as an expensive hobby and an addiction to kids has now become a serious career option. There is huge scope for careers in gaming industry. What started long back in late 90’s with around 10 studios working only on outsourced projects is now grown today to more than 100 studios engaged in game development.”

For a career in gaming industry one needs to have a sound understanding of how gaming technology runs and how people play games. Manvendra Shukul, CEO, Lakshya Digital says, “Gaming as an industry offers career options in Game Design, Gamer Art, Game Animation and Game Programming. Which of these fields you choose would depend on the area of interest.”

For Game Design, one could consider undertaking a specialized course though most game designers are self-taught. Those who learn on their own would be well advised to enrol in a good Computer Science programme.

“There are plenty of resources available on the Internet. For those who go to regular institutes but wish to be part of the gaming industry, they would do well to visit the industry and learn more about the skills they need to hone. It would be very helpful to work at some Game Art development studio as an intern and get familiar with the tools and processes. They must possess a natural urge to create art and have a passion for video games,” said Shukul.

Karpe adds, “India with a growing young population is emerging as a key one-stop for game development, besides China. A background in Computer Science or related disciplines is ideal. Knowledge of multiple programming languages will be a huge boon. Familiarity with design techniques will also increase your hire-ability.”

Knowledge of the 3D Content creation software used in designing games is also a pre-requisite. Knowledge of basic programming and asset integration in Game Engines like Unity, Unreal, CryEngine etc. can be an added advantage

Video Games have become indispensable to modern culture and is one of the most popular forms of entertainment. Factors such as a large young population, rising disposable incomes, increasing smartphone users, 3G and now the roll-out of 4G services providing an efficient high-speed data networks to mobile gamers are all aiding the fast growth of gaming industry.

According to Karpe, “Some of the prominent and in-demand ones are Environment Artists, Texturing Artists, Character Modelers, Animators, Game Designers, Level Editor, Game Programmers, Art Director.”

Gaming as an industry offers career opportunities in different functional areas such as Game Design, Game Art creation in 3D and 2D, Game Animation, Game Programming, Game Testing, Project Management, and other general management areas. If you have a love for art, creativity and innovation, and a deep passion for games, then a career in Gaming could be the perfect choice for you.